June 05, 2011
Still no real rain in May and the ground is suffering. The grass has not grown anywhere near what we would have hoped.

We had our first food fayre in May which was The Shropshire Show at Shrewsbury on the weekend of the 14th/15th of May. The show I think is still trying to find its feet after a rejigging of management and it is certainly getting there. One criticism that was certainly relevant to us being in the food marquee, was that there were too many producers selling very similar products. I feel that this a huge oversight as it is not only the exhibitors but also the visitors which subsequently get a poorer experience. The layout of the marquee was good and plenty of space and the weather was pretty good. As I keep convincing myself it is not always the sales you do on the day but it is the general presence and advertising. As a result of the show (or more to the point hanging around pubs in Shrewsbury in the evenings) we now have our cider for sale in a Shrewsbury pub!

We also had a presence at the Teme Valley Food Fayre in Tenbury Wells. This was ok but I think the numbers of visitors were a bit down on what the organisers had hoped for.

We had my local buddy come and do the processing of the wood I had managed to obtain using my new winch which is pleasing as at the start of the year I was starting to feel a bit ill prepared for the this winters wood fuel. We still have to source some more wood but at least is it a start..

We are still waiting for the delivery of the new labels for the new bottling of ciders we have planned. It seems to have taken an age which is a bit disappointing but having said that we still have to do the bottling - labels are always applied last. The start of June is going to be busy as not only are we going to be bottling the cider but we are about to start doing Elderflowers.

The development of the barn and the hiring out as a venue is taking shape! I seem to have got the Midas touch with Google as a subtle link on the frontpage of the website seems to have generated some interest. The enquiries so far are a bit larger than what we had originally planned but hey - you have to follow the market. Still have a fair bit to do to sharpen up but I am not pretending to offer anything we have not got - if that makes sense. It does however prove that there is a market out there.

Talking about the barn - our first photography course was very successful indeed. The theme of the event was Falconry and the weather was perfect in very way. Chris Neal (The Falconer) did an excellent job with his much loved birds and provided endless opportunities for people to take some stunning photos. Claire Carter from CarterArt was the tutor for the day and did a marvelous job in ensuring everyone was getting the most from their camera. We covered numerous scenarios from the basic to the very challenging 'in flight' shots. A fantastic range of birds were used from Molly the Barn owl (my favourite) , a Bengal Eagle Owl, a Kestrel and also a modest appearance from the cutest baby little owl which was just gorgeous! The range of skill of the participants varied quite considerably. One gentleman had hardly taken a photo in his life and had to borrow a camera. He thoroughly enjoyed the day and it has inspired him to take it up as a hobby! The cameras that were used during the day were quite impressive. I had to secretly whip out my mobile phone to take a few photographs and felt a bit of a numpty!

Everyone rated the day as excellent and already we are planning more courses! 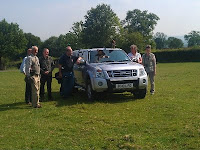