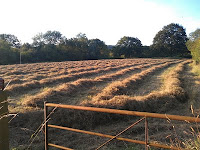 July/ early August has been frantic for all sorts of reasons..... At the start I managed to have a proper weekend away down in London which was absolutely brilliant. A very special weekend which involved doing a whole load of things. Involved going to War Horse, the comedy store and going on a power boat on the Thames! Really really enjoyed the break despite not having a moment to relax. Oswestry Show was in July. This is a show we had not been to before and wow what a surprise! The saturday was brilliant - the sun was out and the atmosphere was very special. The show is in the streets of the town and the whole feel of it was of an idyllic market town. Very well organised and I was rushed off my feet from the word go! Sunday was a little different as around lunchtime the heavens opened... and open they did. It is sometime since I have seen rain like that and the market stall I was under was not quite fit for purpose. I am not sure if any stand could have survived the down
Post a Comment
Read more
More posts