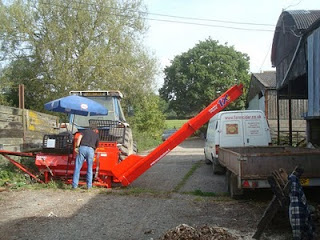 I have at last managed to make my hay for 2010! A week of fine weather arrived at the end of August/start of September. Makinh hay at this time is a bit late really and the heavy dew and cooler nights meant it took longer to make. The old baler started off very badly and I had to even resort to the instruction book... Eventually she sorted herself out and the last field the bales were brilliant. Bridgnorth food festival went very well and the atmosphere was terrific. Ludlow Food Festival was another ggod event. Very big and very tiring but we were very pleased with how everything went. The tractor engine is still being fixed up and we have missed being able to use it particularly during hay making. The days are now drawing in and the nights are getting cooler. Just over a week ago we asked someone to come and process all the wood that I had collected over the winter. This machine was brilliant. The wood was loaded onto a conveyer where it was cut to a given size and then the wood w
Post a Comment
Read more
More posts