The first part of the year was wet to say the least...rain, rain and more rain and then it stopped. From one extreme to another! The farm was very wet however no flooding. But it has however been very mild indeed with only a couple of small frosts.
A fairly gentle start to the year regarding work on the farm as well as cider. Managed to get on with a few jobs that have been on the list 'to be done sometime'. It is also an opportunity to get a bit of rest too before the year kicks off with everything. That said having a little boy at home does not always help with the resting part of the plan...
Once the sun came out and the ground dried up slightly then that was the green light for action! One of the first big projects for 2014 was to lay a significant stretch of hedge as well as plant up an old field boundary. This is all part of the Higher Level Stewardship Scheme which enables us to do certain environmental projects on the farm. We wisely asked a contractor to do the actual hedging work but I had to do preparation work regarding removing any old fencing as well as thinning out numerous trees in the hedge line. This served 2 purposes as all the fencing materials that we could reuse on the farm as well filling up the shed with firewood from the trees.  We decided to do two hedges on the farm for this year with more hedgework planned over the next 2 years. Photographs of the hedgework can be seen on the website. 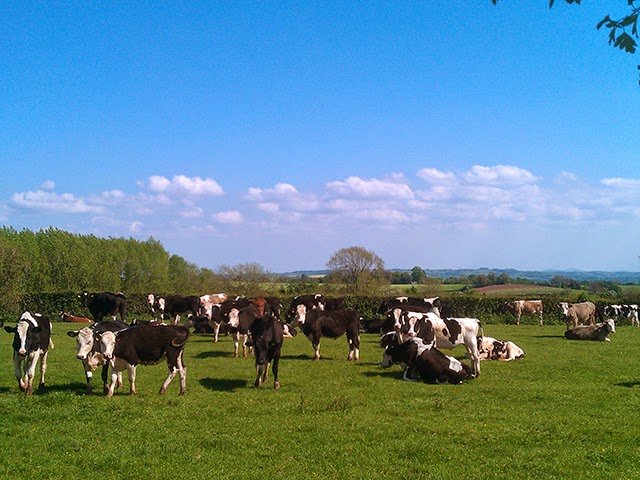 We have a new tenant on the farm as our last one had decided to downsize his herd. Early spring is always my time to check and repair any fencing on the farm in preparation for the cattle arriving. I quite enjoy doing this work but this year it was quite wet to be getting onto the fields with machinery. Despite only having a small farm we also have small fields which equals in miles and miles of fencing... It takes time to replace fencing and as time as gone on they have improved but what is frustrating is that the 'modern'  fence posts we use nowadays simply do not last. I grew up on the farm when post seems to last a lifetime and the only fencing that was required was rusty wire! Now it seems to be the other way that post only a few years old are simply breaking off at ground level due to what appears to be is shoddy preservation treatment by the manufacturers! I did hear that due to a sudden uptake on Grant funded environmental work a few years ago by farmers and landowners, lots of timber was 'rushed' through the manufacturing process and were not allowed to dry out properly to ensure the preservation treatment worked. Whether this is true or not I don't know but it's disappointing that they do not seem to last.

On my fencing travels on the farm I am brutally reminded of some gateways which have been getting steadily worse with access and at some point I need to dig them out and pour a good amount of stone in them. The main problem is that it seems to me that when we do have rain it really can throw it down and these gateways act like sumps which hold water and it is difficult to drain. Off course having 150 acres of catchment area coping with what would be tons of water it all has drain off in an orderly manner. To put it mildly this could be improved and these gateways are part of the problem.  I am aware that I don't have the best machinery known to man but  getting a vehicle stuck on the farm drives me nuts. It slows up the job that was meant to be done, I will probably damage something and it is tricky getting a vehicle 'unstuck' and safely on my own.. I do have the Leyland tractor (known as the Blue Beast) if all else fails, which has the winch on but odds on it wont start and then I have to find a battery etc etc. Sorting the drainage out on the farm is however quite a major project which will take time, machinery and money.

The show season for the cider starts for us in spring time with a few smaller shows to start with to get us back in practice. Weston Park was an excellent show over the bank holiday as it just happened to be the best day of the weekend with beautiful sunshine. It is always a fun show as it is well organised and in such a great setting but as it was the only fine day it seemed that everyone wanted to escape and go to a show. I ran out of about 90% of the cider I had brought!
Unfortunately the opposite happened at the Wenlock Show as the weather forcast was awful and at 6am when I was sorting a few things out before I left the farm the sky went dark again and the thunder and lightening started and then it poured down... I was not overexcited about the day at all at this point as I was destined to be setting up, standing in and taking down a flimsy tent in a graveyard... BUT the weather did ease and by lunchtime there was hot sunshine! Numbers were down however but considering how bad it could have been it was certainly worth going to. I did enjoy the street entertainers especially a bloke called George.

We are doing a couple more shows this year including Shrewsbury Food and Drink Festival at the end of June as well as the Shrewsbury Flower Show in August. As always I am hoping for a good summer as sunshine seems to bring everyone out. 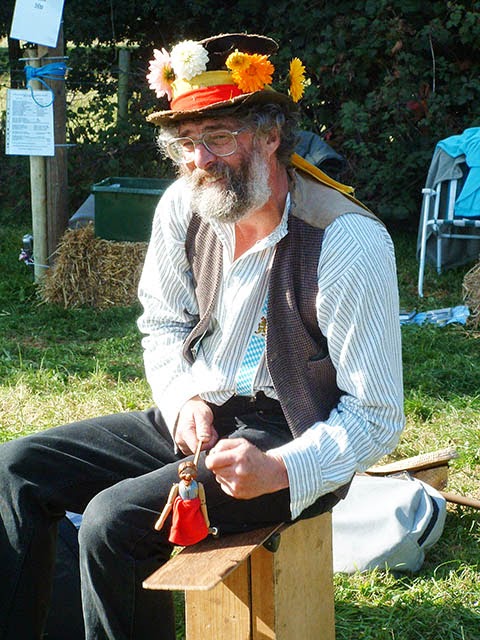 We are also in the process of organising a 3rd Autumn Fayre on the farm. All quite exciting as we have a good few things planned for September 20th. The show will be based on local crafts in the area and so far we have:

We also have some fabulously quirky local entertainment booked (not me!).

Some of you might remember that we have done this on the farm a before a few years ago and they were such a success so we have decided to res erect the idea with the Titterstone Heritage Trust and see how we go!

As I write we are only a couple of weeks to midsummer's night which always seems to come around far too quickly and an abrupt reminder of how quick time goes! Elderflower picking is due to start soon and the crop is looking good. One of the most mellow jobs on the farm as it has to be on a bright sunny day to get the highest quality flower. Utterly silent as there is no machinery required apart from some secateurs snipping away and listening to birdsong. I also think it is a refreshingly primitive action of simply picking a flower to prepare for a drink.