I have to say that 2013 has been a year to remember for all sorts of reasons. Looking back on the year it has been one huge roller coaster and I have loved every minute of it!

This year has been very good for for all sorts of reasons and one is how generous mother nature can be with harvests. As Autumn approached we were blessed with a great crop of damsons on the farm which was a great relief. Had some lovely weather to pick them too and really enjoyed the experience. On one side of a particular hedgerow there is one of the best views on the farm overlooking into Herefordshire. With the fine weather, lovely extensive views, solitary bliss and eating fresh damsons like sweets! Fond memories indeed!

The shows have been very good overall in 2013 and the great weather certainly helped. We really only attended the shows we knew should be pretty good and also due to the new addition to the family we wanted to see how the year would turn out. We have some new ones planned for 2014 though already.

Talking about shows we are hoping to fire up the Mahorall / TCHT Autumn Fayre again for 2014 which I am quite excited about. We have hosted the Autumn Fayre with the help of TCHT a few times now at the farm and it seemed to work so very well. A date is yet to be organised but watch this space!

We have also been accepted into the Higher Level Stewardship Scheme which is fantastic news. A lot of planning is required over the winter but it will enable us to do a number of little environmental projects on the farm such as coppicing, hedgelaying wetland creation and associated fencing.

As mentioned before I had a large oak log from a tree on the farm which had fallen over, which I was hoping to make into a large beam. Now some of you know that I am guilty of all kinds of planning for ideas which not all happen BUT some do. Now it must be about 15 years ago when I came across a screw from an old single screw cider press which was down at a local auction. I had to get it and not only was it listed poorly on the auction description and no one really knew what it was BUT it also had Coalbrookdale stamped on it. We all know that this was where the industrial revoultion was at Ironbridge and it could be as old as 200 years! Anyway I managed to bag it for £20 notes and it was then 'put in storage' on the farm.... The Oak tree falling over on the farm was sad but I am hoping it has not died. The opportunity of a beam awakened the idea of building another cider press using the old screw. THEN I was offered to run a cider course at Acton Scott in October so all of these things just sealed the plan. I was lucky enough to know a buddy to help building the steel frame and also another mate who could do the milling on the beam to finish it up. All of things came together beautifully and not only did the course at Acton Scott went very well but now have a travelling cider press! For anyone who is interested I have put an album up on the website with a few pictures of it.

For next year I can see it being available for hire as a complete portable cidermaking set up!

The season for apples this year have been on the whole pretty good. The apples have however played tricks on us this year in as much as some refused to come off the trees due to the lack of cold weather. Even the wind that we had in December the trees refused to budge off the trees.We did manage to get the early varieties for once which have increased the amount that we could process. That said cidermaking seemed to go on for ever this year as we eventually finished late December. It was to be expected though as our aim was to process as many apples as we possibly could as it was such a good season. As a result we have made a furious amount and the cider shed is now brimming full! It is a lovely feeling to have now got plenty of stock when we had the opportunity.

It has been a heck of a year but looking back on what has been achieved I am very satisfied indeed so bring on 2014! 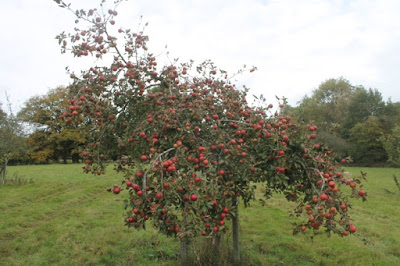 February 2020 Rain, rain, more rain and gales... The weather continues to be even more challenging with gales and relentless rain. When it rains the results are that it is more difficult to get onto the fields with machinery without doing damage or more to the point getting stuck! One project I have managed to at least start, is to replace an important fence that borders the farm drive. The advantage is that I can do most of the work using the hard surface of the drive so no mess in the fields. It has to be done before spring as the fence line was very weak. Old fenceline with undergrowth. There was also the situation that undergrowth has started to grow up in the fenceline which makes it impossible to tighten the wire so the only option is to start again. Old fenceline removed. With all of the torrential rain we have experienced the streams on the farm become torrents but on the whole we are lucky as we are on the side of a hill that we are relatively unaffected by
Read more