Spring time on the farm

April 17, 2012
I love this time of year! Not only is the countryside waking up with spring but we have summer to look forward to as well.

Heck - lots of things going on and only some I can talk about freely !!

The toilets have had the electricity supply uprated so there is now hot water for the sinks in both of them and also there is a shower too! I still have to do the tray and also the walls of the shower but that can come later.

I have been spending a great deal of time in the barn and I am very pleased with the progress. It was however unfortunate that during the spell of the lovely weather we had, I was painting the inside of the beams right up in the top of the shed which was really hot, and the fumes from the paint did not help either.

I have spent quite a bit of time installing a false wall at the back of the new 'Wagon Bar' which adjoins the main barn. With the addition of over 30 Wheel Back chairs from ebay it is taking shape and as time goes on it will get better and better. I am wanting to support wagon wheels on the roof which are lit up ! 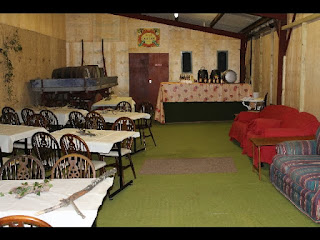 I also have acres of replacement carpet courtesy of the NEC which I will lay probably next month. A little more of a deeper green than the present one but it will lok a lot fresher and newer than the current one.

I have also have now invested in a projector for the barn with an 8ft square screen. Invested may be too strong a word as it was purchased from a local pub... but money did change hands. Anyway it is quite a machine for me to start off with. Not full hd but I can see that being on the menu in times to come. I wanted to have a better set up for the talks that we do about cidermaking etc but progress has certainly been made! I have always enjoyed doing the technical things at a few local pantomimes and now I have the opportunity to have a go on the farm! I am really looking forward to seeing its potential !
The bird of Prey event went very well and I am very pleased with how it all worked out. 50 people turned up and the sunny weather has also helped. Below are a few photos 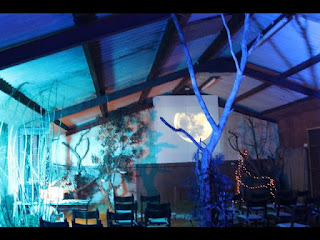 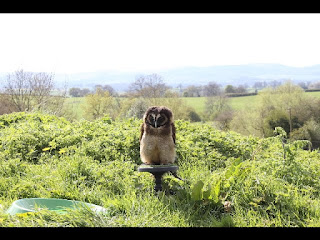 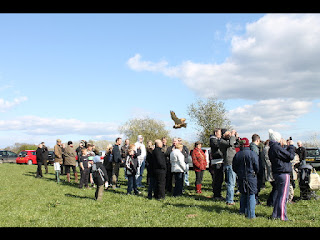 I have never seen so many birds of Prey in one place before! A fantastic variety of both hawks and owls and everyone seemed to have good time. Unfortunately I overordered the beer situation and I am having to work my way through it in the next few days.... There was also an interesting display of 2 spaniels (who were extremely well trained) working with the birds by flushing out a pretend rabbit on a string and the Birds swooping in to catch it! Great to watch up close.

Many thanks to Hawkeye Falconry and Ashton Owls for bringing and displaying these magnificent creatures.

We have also got a replacement van which is quite exciting - I am just hoping it will do the job. Looks a lot smarter than the old one and I am looking forward to putting the signwriting on.

Our next event is Bird Of Prey Photographers class at the farm on April 29th.